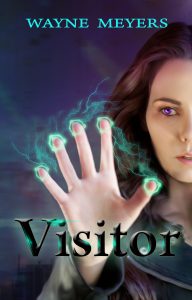 The simple answer is, VISITOR is a science-fiction novel I wrote.

But that is like saying an oak is just a tree. It’s absolutely true, yet unsatisfying and incomplete. What kind of tree? What shape are the leaves? What is the trunk’s circumference? Did it grow among other trees, or did it rise majestically alone atop a stony outcropping on some vast, cloud-covered peak?

To complicate the answer further, VISITOR became a lot more than I had intended it to be. It was my third completed first draft, written around 2002, unsuccessfully pitched to agents and publishers, then put aside. There’s a lot of emotion and history behind that last sentence. In 2002, I felt I knew how to write, and only needed the support of an editor or agent to smooth over my story ideas into a quality book. I had made the same mistake with my first two manuscripts, which were both the first volumes in different series, and I decided the rejections were because they were not each a complete story unto themselves. So I wrote VISITOR as its own story in the same style, performed a cursory edit, and impatiently sent it off with the same results.

Fast forward to 2012. I had collected two more rejections over the years from completed first drafts, and started and stopped at least two more. The tides were turning in the publishing industry. Self-publishing was becoming an accepted, and in many cases, preferred method for an author to share their works with readers. I realized here was my chance! I could do for myself what the publishers had passed over. Their foolish oversight would launch my writing career in the dawn of this exciting new age! I pulled VISITOR from my backup files, and with a maniacal cackle, prepared to upload.

A funny thing happened, then. I realized I did not know how to cackle maniacally, but more important, I read VISITOR for the first time in ten years. Well, I tried to….

My mouth fell open. Sweat broke out across my brow. An eerie chill crept up and down my spine.

Yes, my eyes opened. I could not allow this piece of crap to bear my name on the internet, for all to see and ridicule. What had I been thinking ten years earlier? This is what you’d call the pivotal moment in my writing career. I realized and accepted I was not as smart as I’d thought I was. In fact, I was downright dumb.

Fortunately, my days of self-imagined skill had ended. I realized while the stories I’d written were interesting and creative, my execution of these concepts fell far from complete. As mentioned above, I had written first drafts, and first drafts require an enormous amount of editing and feedback before they become close to completion. Unsure what to do next, I volunteered as an intern for a literary agency to learn more about writing and the publishing industry. Finally, a smart decision! I did learn a great deal about the industry, and a little about how to write better. Writing is a great deal harder than it looks. I made some contacts, and even convinced an agent to represent VISITOR, although that relationship did not work out. I was on my way!

Before I presented my manuscript to the agent, I paid a lot of money for an editor to do their magic. I knew I needed help. Unfortunately, I did not receive feedback in proportion to what I spent. Perhaps that wasn’t possible in its current form, but even after I applied the edits, VISITOR was still a mess. Bad dialogue, head hopping, too many adverbs…a classic list of newbie mistakes. On top of that, I had too many PoV’s, and major plot points did not align. Cue the rewrites.

I rewrote VISITOR from start to finish to correct these errors, then went back and rewrote it again. And again. These edits were painstakingly applied, yet after each pass, I found there were more problems that required correction, and I’d edit again. And again. Beta feedback became critical to point out parts I had still missed. And even when I felt it was ready and sent it off to my awesome editor, Rosie, for one last round of feedback, she still found a bazillion things that took away from the story.

At the time of this blog post, Rosie is performing one last round of edits and proofreading before I upload the file. VISITOR will finally achieve publication. It’s not the version I originally had in mind. With a great deal of hard work, self-education, humility, and sweat, VISITOR has become an incredible, well-crafted story with a theme and awesome characters.

Stay tuned for my next post, which shares what VISITOR is actually about!