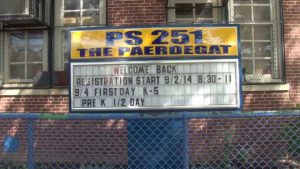 My life changed forever when I was ten years old, and my fifth grade teacher, Mrs. Friedman, gave us a writing assignment.
The assignment itself has long escaped my memory, but the story I wrote involved the flowers on my sheets coming to life at night, drawing me into an alternate world. I recall the actual sheets as some shade of blue, with a white flower pattern imprinted upon them, but in my young mind, the flowers were of many colors, and they talked to me.
I had no idea where the ideas came from, or why I wrote this. The words simply appeared when I called upon them from some alternate dimension in my mind, which I thought was totally cool, and I put them down on paper. It was the first story written purely from my imagination, and if not for Mrs. Friedman, it might have been my last.
After turning in the assignment, Mrs. Friedman made a great deal about my story, taking it so far as to present it to the principal, Mrs. Kamen! She also fussed over my story, and the end result of these accolades is I felt blessed with a gift, which set the stage for future endeavors.
The first story I remember writing after that was a western, believe it or not. During my early teen years, I had also started a screenplay about a secret agent, and a science-fiction space opera complete with poetry. Where are these today? Alas, long gone, I know not where. I have very few remnants from my childhood, and though I’ve retained a few notebooks with stories from my late teens, these first scribblings are lost forever.
Years later, when my daughter was several months away from arriving, I decided to start writing with the intent to finish and publish something, and though many more years passed since then, the passion to achieve this goal never diminished.
I’ve always read. Ever since my father encouraged me to read “Lucky Starr and the Oceans of Venus,” by Paul French (AKA Isaac Asimov) when I was in my early teens, I’ve read everything I could get my hands on. I devoured books. Books became my doorway to a better world. And the more I read, the stronger became the desire to write my own.
That passion continues today, stronger than ever, and I am thrilled (and terrified) to soon share my imagination with the world.

This site uses Akismet to reduce spam. Learn how your comment data is processed.